This is something I only shared with a few people while it was happening. Even then, I realized I had shared it with too many people. Unwanted comments were mindlessly given making the emotional trauma even worse. It was scary, devastating and for over a month I was doing my best to go on about life as best I could all the time living with this thing over my head.

I don’t normally share personal difficulties publicly. I’ve shared my struggles through motherhood, accepting my body, the nitty gritty on my experiences through pregnancy and birth. It isn’t that I haven’t shared personal information, it’s that I’m very careful and intentional about what and how much I share. If I’m going through something hard, emotionally or physically, I usually don’t talk about it or if I do I chose to share it I usually wait until after the fact. I do this for several reasons: one, I believe that how we feel about a situation in our mind contributes 90% to the way we feel about something. When people ask all sorts of fear-based questions or give thoughtless harmful comments, it makes the mental battle that much harder. To save myself from this and to keep my mindset elevated, I don’t share. Two, I don’t like to complain or spread negativity on the internet. My goal is to fill the internet, especially my social media sites, with positivity. When I say I’m going through something bad or challenging people can be very kind in sending thoughts and prayers, but it also opens up the door for more unwanted advice and complaints. If I go through something difficult, learn from it, then decide to share that with everyone it’s much better. Three, some things are just private to me. My whole life is not online nor do I share it even with my family. I keep bumping into the misconception that because someone is active on social media they are also unbridled in what content they put out there. If someone is creating anything meaningful, I promise you, it’s carefully selected. I like that some things in my life are very private.

So, what happened? In September Luka and I went on a trip to Prague. We drove there and it was a nice little road trip since it was only about 6 hours each direction. We were there for the weekend and were very active during our time there. On the drive we stopped about every 2 hours to take a mini stretch. It was a long weekend and we got back, exhausted, around 11PM at night on Sunday night. Monday morning I woke up, went to the bathroom, and discovered some light bleeding. My heart sank. Oh my God! I checked again. That was it. No more blood showed. Thankfully I had an appointment with my doctor for that afternoon anyway so I decided that I would wait for my appointment unless it happened again then I would go immediately. I was 15 weeks pregnant so I thought I’m past the most unpredictable stage of pregnancy. Still… To wait all day in that kind of mental torment is awful. Affirmations, positive things to read, comforting things to read, that was my go to. I believed everything was going to be just fine even if I was scared.

I came to my doctor’s office and while the midwife was seeing me I explained what happened. She asked if I had done anything different and I told her about our trip. She said that when you’re pregnant you should stop every hour when driving. Being in a sitting position really affects the blood flow to the uterus. The doctor did an ultrasound and as he placed the sensor on my abdomen I held my breath. Hoping, praying, everything was okay. There was little baby… squirming away. A shakey exhale of relief. “Everything with the baby is ok…” said the doctor. “The placenta is okay. The uterus is fine…” he said in a monotonous tone. Then he paused the screen. “Here. The placenta is attached close to the cervix. Here is the cervix, here is the placenta. This means that if you are very active the cervix can touch where the placenta attaches and cause some damage to the blood vessels. This is why you had some bleeding. For the next 5 weeks you must rest and no sexual intercourse. After 5 weeks you will come back and we will check again if the placenta has moved.” WHAT?! Suddenly I felt like I went from a healthy woman and a healthy pregnancy to a high-risk pregnancy. And it was terrifying. I had never heard of anything like this. That was all the information I was given.

This is where I will interject and tell you that if you are pregnant, hell, if you go to the doctor at all for anything, and they give you some kind of information that frightens you or that you aren’t sure of, ASK ASK ASK. I was totally shocked and given no reassurance. I should have asked at least a dozen questions:

Is this common?
How often do other women experience this?
What does it mean that the placenta “moves”?
If it doesn’t move, what does that mean?
What about playing with my toddler?
Is there a name for this?
How many women who have this are fine later on?

Get all the information you can squeeze out of your doctor. It will help you immensely. Many times doctors have to give you the most precautionary directions and they don’t mention that it could easily be all fine. I don’t blame them for this, that’s their job to make sure you stay safe. But they know everything about it and we don’t. So we must ask. I didn’t and I left there that day feeling sad, frightened, and unsure of what was going to happen to me and my baby. I cried a lot. When Luka came home from work I told him and I cried again. He asked questions, to which I had no answers because I didn’t even know them myself.

This is where I made the mistake of telling anyone. Not that I shouldn’t have shared it with some people who are close to me who I know could comfort me and pray for me and the baby, but I wasn’t selective enough. First, after this experience I stopped telling people when I have doctor appointments. I don’t want them knowing. It opens the doors for more careless questions and comments. Plus, if I have something to deal with afterwards, I don’t want their questions until I am good and ready. Even when we found out the sex of our baby, no one knew we were going and when we found out we kept it to ourselves for a while. It just felt nice to me to be the one in control of the information.

I told a few selected people and it was too much. A few were great and told me that would pray for me and everything would be okay. But one comment in particular is what changed my perspective on this completely. Relating everything that had happened and feeling very fragile and unsure, the comment came fast and thoughtless, “Oh, that sounds like Placenta Previa and then you have to have a cesarean.” There was nothing, nothing worse to say to me at that moment. This person wasn’t intentionally trying to viciously hurt me, but they did regardless. They know how important natural birth is to me. They know how a cesarean is not a nice thing for anyone. And yet, they didn’t at all stop to think if that was a nice thing to say or not. Even after the comment was out there, there was no clue on their side that that may have not been the right thing to say.

After that I went into hiding for a few days. I didn’t talk to anyone. I didn’t go out. I was afraid and depressed. It was really, really hard. I looked up placenta previa and cried and worried. After about a week of this I started to search online for more answers. I discovered Low-Lying Placenta, which is often coupled with placenta previa, but isn’t the same. I searched on and on. Forums, websites, medical texts, midwifery sites. Most medical sites read, “low-lying placenta or placenta previa” as if they are the same thing. However, what I discovered was that a low-lying placenta was different in that the placenta didn’t touch the cervix and most commonly when detected early, it resolves itself. HOLYF@#*SH*&! WHAT?! And no one told me this?!!?!?! One CNM said, “Low-lying placenta before 20 weeks is so common it should be considered almost normal.” What happens is that the placenta attaches and as the uterus grows with the baby’s size, the relation to the cervix also changes. It may start out low, but after you get bigger it’s completely cleared of the cervix and of course you can go on to have a natural, vaginal birth. I also discovered that when the placenta attaches to the uterus it’s pretty much a roll of the dice where it lands. Nothing you do affects this. That made me feel better. At least I didn’t do something wrong to cause this.

I really really really really wish my doctor had told me these things. It would have saved me and my unborn baby stress. A lot of stress. Perhaps their thinking is that if they make it not-so-serious the woman won’t make it a priority. I don’t know. It doesn’t matter now, but this is why I will always ask for everything from now on. Upon more research I found that most doctors and standard medical facilities will tell you to “rest and abstain from sexual intercourse” whereas most midwives, CNMs, and the more natural-supporting doctors and centers will tell you to “go easy and be careful about sex, if you have any light bleeding then you should abstain until later.” I should be really clear here: LISTEN TO YOUR DOCTOR. And if you have questions, ASK. Don’t go read something online and then make a decision to do something differently from what your doctor told you to do. Consult him/her. I spent hours and days pouring over TONS of materials on the subject. After this I could call my doctor or midwife and tell them what I had discovered and ask questions regarding it. You and your baby’s safety are always the highest priority. Don’t ever do something that you will look back on and think, “What if…”

After 5 weeks, I had another appointment and this was the morphology or anatomy scan. Believe it or not I actually had to ask my doctor if the placenta had moved because he didn’t mention it. “Oh, yes” he said casually, “It’s not at all close to the cervix.” I’ll reserve comments for this. I am just thankful and grateful that everything was fine with me and with our little girl. We are both doing well and can look froward to an all natural, vaginal birth. It was a hard and scary experience at the time, but I learned something from it and I feel that I’m not the only one who has been through something like this. Maybe someone else can benefit from my experiences. 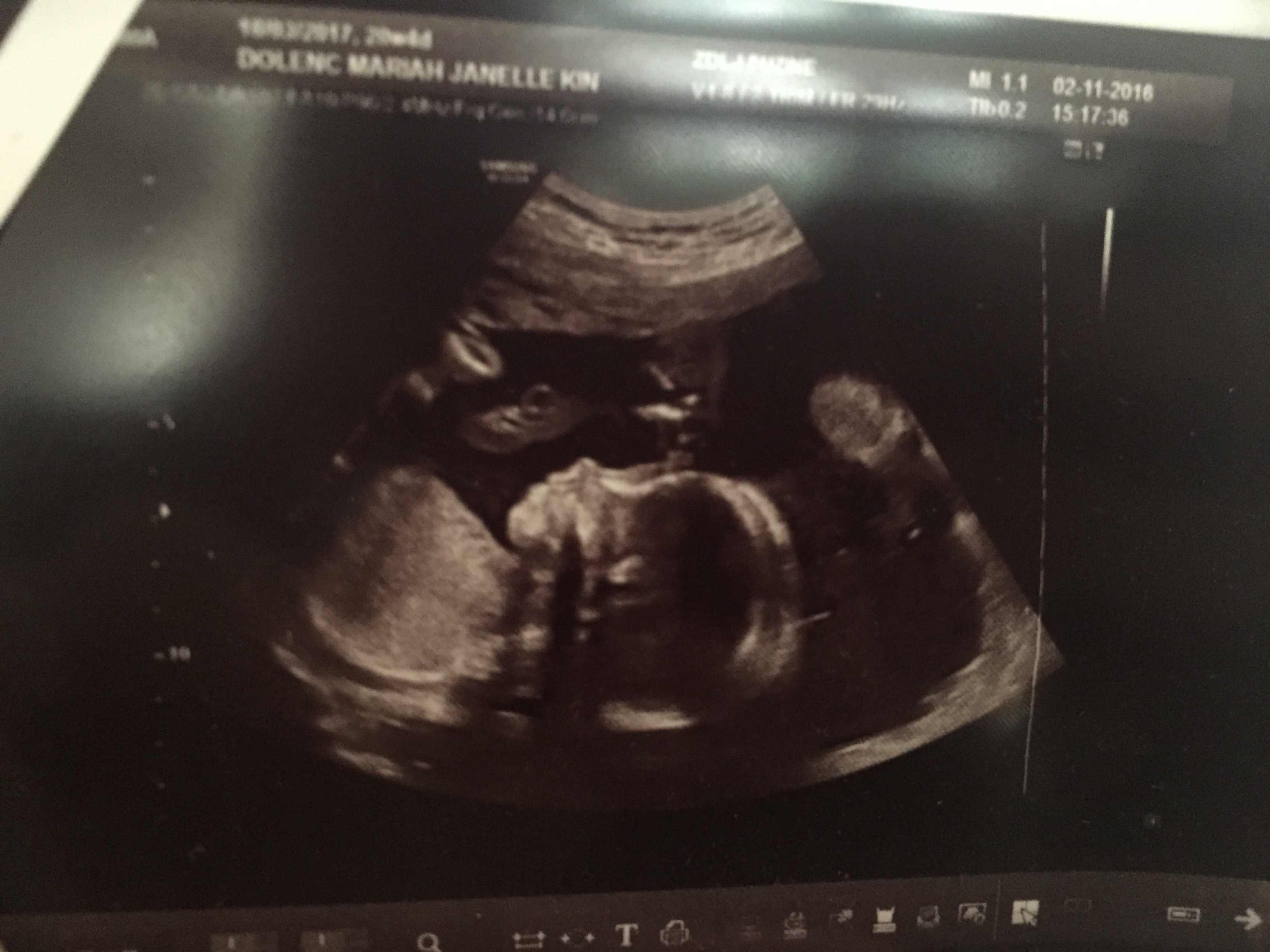 Did you have any scary experiences or complications during pregnancy? Were you able to resolve them? Please share for all us mama’s. It’s so helpful to know you’re not the only one!